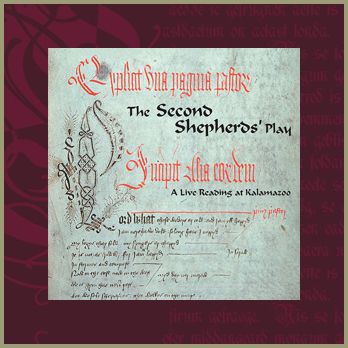 The Second Shepherds’ Play: A Live Reading at Kalamazoo
$5.00

The Wakefield Master is thought to be the author of this second version of the shepherds' play contained in the Towneley MS (now at the Huntington Museum's Library in San Marino, California). Illustrating the late-medieval aesthetic of ideal and grotesque, the great majority of the play involves Mak's devilish stealing of one of the shepherds' sheep as they sleep in the fields of West Yorkshire near Wakefield in the cold weather of Christmastime. When the shepherds bring gifts to Mak and Gill's supposed newborn son, they discover that he has a very long snout and a rather woolly body! The same shepherds are handy for the true Nativity of Christ, the Lamb of God, which follows Mak's being tossed in a blanket as his comic punishment.